It’s no secret that Martha Stewart inspired many of us way back when the internet did not exist, when we marveled on the beautiful books she published, superbly giving us tips on cooking and decorating for family celebrations.

For someone living in far off Argentina, these books were treasures.  I would linger over them with a nice cup of coffee, dreamily planning my family gatherings around them.

Many years ago, I read a wonderful idea by Martha Stewart in her book Good Things (Best of Martha Stewart Living), suggesting her readers use egg ornaments for Easter, showing a beautiful egg topiary, and also hinting that they could also be hung on a “tree” made with a branch.

About that time I had the rare opportunity to see the wonderful Forbes Fabergé collection, the largest private collection of Fabergé Imperial Easter Eggs, owned by the Forbes family before it was sold privately to the Russian oil and gas magnate, Victor Vekselberg.  In the end of this post I put together a description of these jewels.

Mr. Forbes exhibited these eggs at his own museum of art and collectibles, annexed to the offices of Forbes Magazine at 60 Fifth Avenue.  This building is now owned by NYU (New York University).

Coincidentally I found this video made by Martha Stewart, describing the beautiful eggs!

Anyway, I decided to start my own collection of Easter Eggs, with idealistic imaginings of imitating the Fabergé eggs. 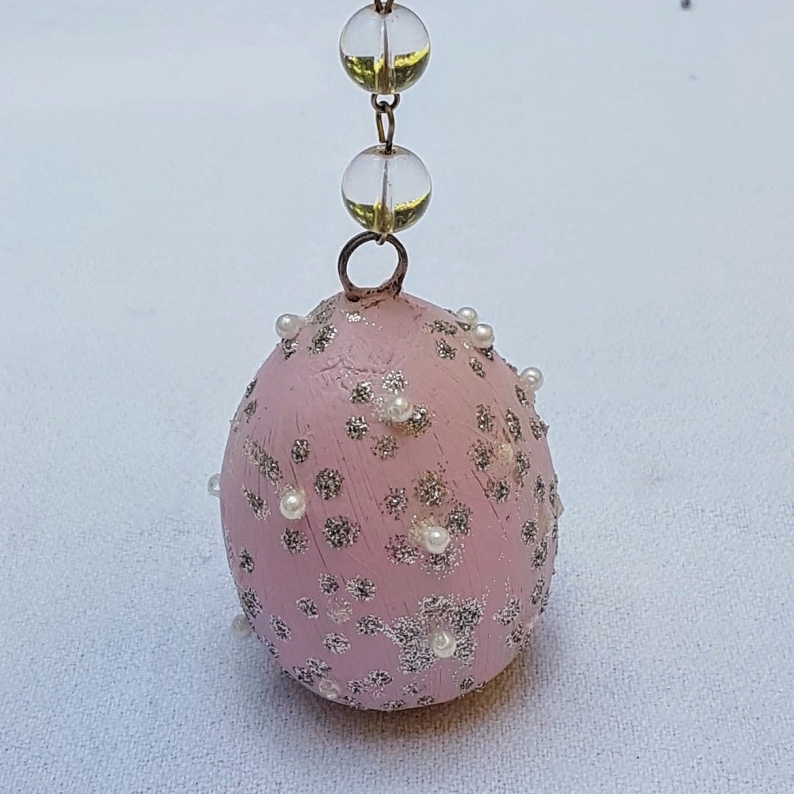 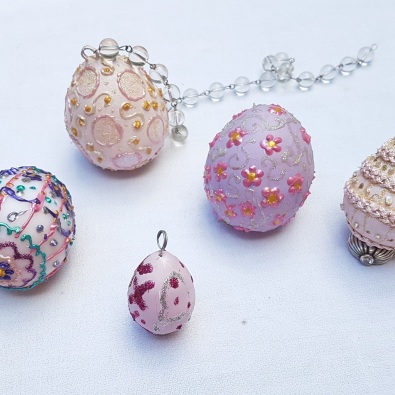 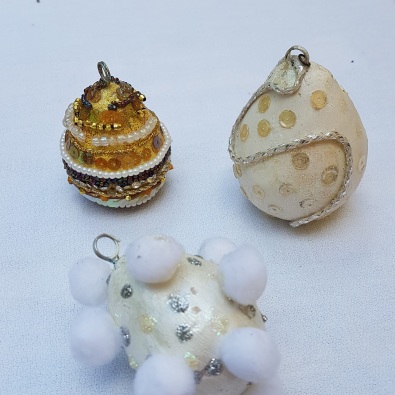 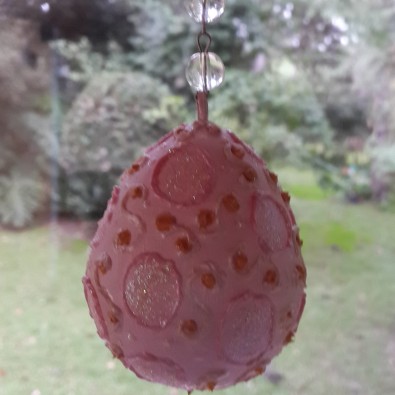 There were sooo many eggs, that I took Martha Stewart’s suggestion, and started what is now a full flung Rossetti tradition!  We started hanging the eggs on a tree, a poplar branch which my daughter dragged home when she was about 5 years old.  Years later we spray painted it white, but at first we enjoyed it natural.

First with my daughter Sabrina, and then also with my nieces, Isabel and Antonia, we decorated quaint quasi jewel-like eggs, and so our egg collection grew.  My two nephews, Sebastian and Philip, and Pablo, my brother, joined in the creativity and I now have rabbits, eggs, and baskets made by my whole family, which I proudly display every Easter.

Another great idea for Easter is to use the cold porcelain and a bunny cookie cutter to make these quaint bunny magnets for your refrigerator!

To make these colorful eggs, we use “Cold Porcelain”, with an inset of small styrofoam balls to make the center.  Of course, I like to make the eggs vary in sizes, which makes the tree even more interesting!

We painted these cold porcelain eggs with acrylic paints and decorated with 3D Color Glitter Glue, sequins, pearls and all sorts of bling that we found around the house.

At first I tried working with Salt Dough, but the high humidity here in Ingeniero Maschwitz made that project a disaster.  The dough never hardened, and it actually became softer as the days went by!

Cold porcelain is an inexpensive, non-toxic, very easy-to-work-with material. Despite its name it is not porcelain, its main components are cornstarch and white craft glue.  Cold porcelain has a much finer finish than salt dough, and it hardens dry, even in very humid climates.  It air dries overnight, so it is ideal for weekend projects!

It can be purchased commercially or can be made at home.  Cold Porcelain is known by many different names, such as as porcelana fria here in Argentina.  The one I purchased on Amazon comes in 1 pound bags, which is great so it doesn’t dry up!

If you prefer to make your own, you can find many different recipes for cold porcelain.  The paste is prepared by cooking on the stove or in the microwave for a brief time and then kneaded until smooth.  I prefer the stove top method, because I always fret that I’ll overcook the dough in the microwave.

My favorite recipe is as follows:

If you’d like to make colored porcelain, knead the color of your choice in thoroughly before you begin.  You can add acrylic paint during the initial kneading while making the cold porcelain.  I have also successfully colored it with food coloring.  My favorite method is to paint with acrylic paint after the eggs dry.

Knead each piece before you shape it. Every time you use a new piece of clay, knead it first to increase its elasticity.

Shape the clay into the desired shape. I used Styrofoam balls so I didn’t have to use too much dough, and so it would dry faster.  Use such a base for large pieces. Cold porcelain shrinks significantly as it dries, and a large piece may not dry sufficiently all the way through.

Before the porcelain drys I attach 8mm eyelet pins.  These will be necessary if you want to hang the ornaments.

If you want to add pieces of dough, they can be glued together using ordinary white craft glue.

Leave the eggs to dry. Cold porcelain requires no additional cooking and will harden simply when exposed to air.

How long this takes depends greatly on the size of your eggs, the overall weather temperature, and the humidity of the air. Keep checking until it is hard.

Once dry, have an egg decorating party!  Every guest can bring their own bling to decorate the eggs.

The jeweled Fabergé eggs, possibly numbering as many as 69, were created by the House of Fabergé. Most of them were manufactured under the supervision of the goldsmith Peter Carl Fabergé between 1885 and 1917. The most famous are those made for the Russian Czars Alexander III and Nicholas II as Easter gifts for their wives and mothers. The House of Fabergé made 50 such “Imperial” Easter eggs, of which 43 still survive. Two planned for Easter 1917 were not delivered because of the Russian Revolution in which the Romanov Dynasty was overthrown and all the members of the imperial family executed.

The Fabergé Imperial Easter eggs are certainly the most celebrated and awe-inspiring of all Fabergé works of art.

The story began in 1885, when Emperor Alexander III decided to give a gold Easter egg to his wife the Empress Marie Fedorovna, possibly to celebrate their 20th wedding anniversary. The Emperor gave detailed instructions regarding the design of the egg, making further suggestions to Fabergé as the project progressed.

Easter is the most important occasion of the year in the Russian Orthodox Church, equivalent to Christmas in the West. A centuries-old tradition of bringing hand-colored eggs to Church to be blessed and then presented to friends and family, had evolved through the years and, among the highest echelons of St. Petersburg society, the custom developed of presenting valuable bejeweled Easter gifts.

Known as the Hen Egg, it is crafted from gold, its opaque white enameled “shell” opening to reveal its first surprise, a matte yellow gold yolk. This in turn opens to reveal a multi-colored, superbly chased gold hen that also opens. Originally, this contained a minute diamond replica of the Imperial Crown from which a small ruby pendant egg was suspended. Unfortunately these last two surprises have been lost. 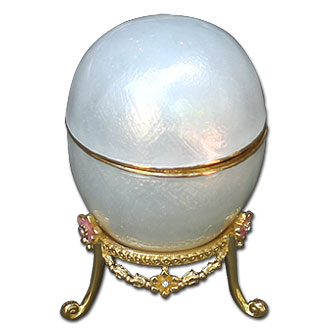 The Empress’s delight at this intriguing gift with its hidden jeweled surprises was the starting point for the yearly Imperial tradition that continued for 32 years until 1917 and produced the most opulent and captivating Easter gifts the world has ever seen.

Each egg, an artistic work of art, took a year or more to make, involving a team of highly skilled craftsmen, who worked in the greatest secrecy. From 1887 Fabergé was given complete freedom in the design and execution, with the only prerequisite being that there had to be surprise within each creation. Dreaming up each complex concept, Fabergé often drew on family ties, events in Imperial Court life, or the milestones and achievements of the Romanov dynasty, as in the Fifteenth Anniversary Egg of 1911, commemorating the fifteenth anniversary of Nicholas II’s accession to the throne, or the Romanov Tercentenary Egg of 1913 that celebrated 300 years of the House of Romanov.

Although the theme of the Easter eggs changed annually, the element of surprise remained a constant link between them. The surprises ranged from a perfect miniature replica of the Coronation carriage, that took 15 months to make working 16-hour days, through a mechanical swan and an ivory elephant, to a heart-shaped frame on an easel with 11 miniature portraits of members of the Imperial family.

The Winter Egg, designed by Alma Pihl, famed for her series of diamond snowflakes, is made of carved rock crystal as thin as glass. This is embellished with engraving, and ornamented with platinum and diamonds, to resemble frost. The egg rests on a rock-crystal base designed as a block of melting ice. Its surprise is a magnificent and platinum basket of exuberant wood anemones. The flowers are made from white quartz, nephrite, gold and demantoid garnets and they emerge from moss made of green gold. Its overall height is 14.2cm (5.5″). It is set with 3,246 diamonds. The egg sold at Christie’s in New York in 2002 for US$9.6 million.

One of my favorite is the Lillies of the Valley Egg. It was presented by Czar Nicholas II to his wife, Alexandra.  This egg’s surprise is “elevated” out of the egg by twisting a gold-mounted pearl button. When fully raised, three portraits are visible under the Imperial crown set with a ruby: Czar Nicholas II and his two oldest daughters, Olga and Tatiana, painted on ivory. The portraits are framed in rose diamonds and backed with gold panels engraved with the presentation date of July 31, 1898. 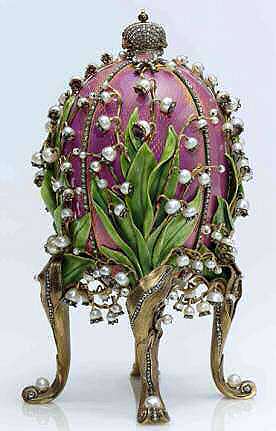 My other favorite is the The Bay Tree Egg. It’s 30cm (12″) high, and is made of diamonds, citrines, amethysts, rubies, agate and pearls, and, of course, gold and enamel.

Tsar Nicholas gave this egg to his widowed mother in 1911.  Hidden between the leaves on the tree egg was a little gold winding mechanism tucked inside. Turning it, the top part of the egg rose up and a tiny little feathered nightingale popped out to sing, flap its wings and move its beak. When he was done singing, the bird and the top of the egg all descended back down.

Our first family egg hunt with my nephew Sebastian and daughter Sabrina was organized by Alejandra, my sister, in my parents’ house and wonderful garden, which is actually where I still live.  This garden has given me years of memories and comfort, with wonderful nature encompassing me. 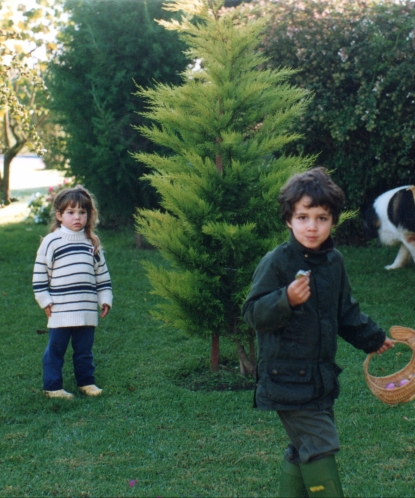 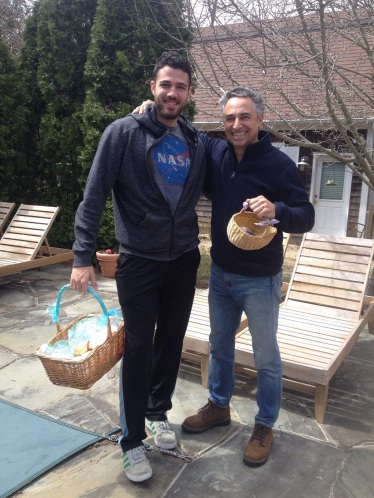 “We are a participant in the Amazon Services LLC Associates Program, an affiliate advertising program designed to provide a means for us to earn fees by linking to Amazon.com and affiliated sites.”

This post contains affiliate links. If you purchase an item from this link, I may get a small commission at no extra charge on your part. I only include links for products that I currently use and enjoy. Thank you for your support!

Click on the photos below to purchase the items on Amazon: